Facebook’s revenue has consistently increased since the firm went public in 2012. 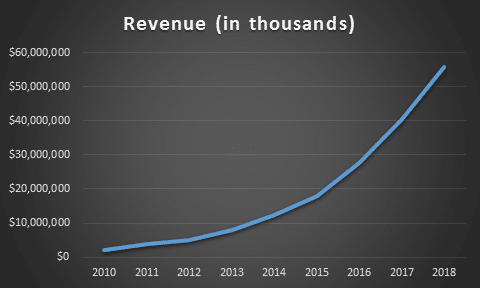 But Facebook was pessimistic in its most recent 10-K:

This is a shocking admission, given the resilience of Facebook’s revenue growth. 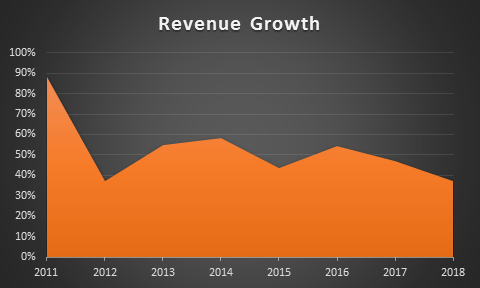 The main problem is that Facebook is no longer adding users in its most profitable region:  the U.S.

Facebook has hovered around 180 million Daily Active Users (DAUs) in the U.S. and Canada since 2016.  The number of European users actually declined in the 3rd quarter of 2018, and has stabilized around 280 million.

Clearly Facebook has reached a saturation point in the U.S. and Europe, where it’s becoming exceptionally difficult to sign up new users.

Some prefer to ignore Facebook’s user growth, instead looking to Instagram and WhatsApp.  But neither of these subsidiaries has demonstrated anything close to the profitability of Facebook, which has been a profit-generating machine.  Instagram is the most promising, generating close to 15% of Facebook’s revenue in 2018, but WhatsApp generates virtually no revenue.  But let’s leave aside Instagram and WhatsApp, and ask the following question:

Is Facebook as large as it will ever be?

There is evidence that suggests the answer is no.

Take a look at Facebook’s DAUs by geographic region. 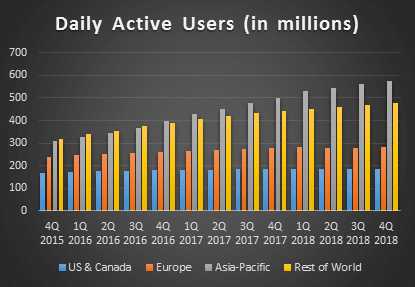 Facebook nearly doubled its users in the Asia-Pacific region in just 3 years’ time, going from 309 million to 577 million.  User growth for the “Rest of World” was almost 50%, going from 319 million to 478 million over the same time period.

But there’s a big catch:  those same regions generate the lowest revenue per user.

The revenue gap between the U.S. and other regions is enormous. 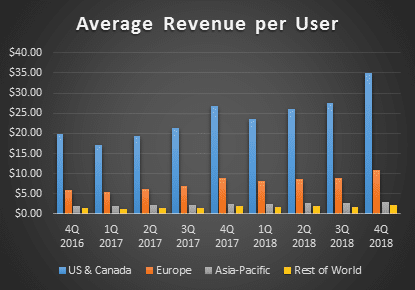 Facebook generates more than 11 times more revenue per user in the U.S. than it does in Asia.  This is why nearly half of Facebook’s revenue comes from the U.S. even though just 10% of Facebook’s users live there. 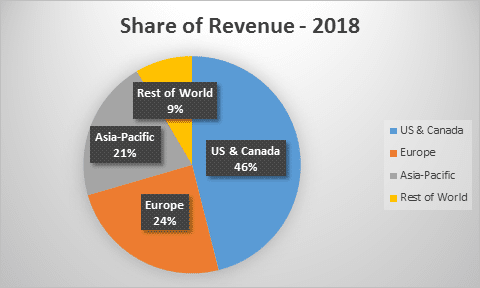 Facebook can continue to grow, but it must find ways to better monetize users outside of the U.S.

Facebook increased in its revenue per user in the U.S. with better ad targeting.

Companies don’t want to pay for ads that no one is going to click on.  More precise ad targeting means a higher click-through rate, which means Facebook can charge more money for the ad.  This is absolutely critical because 99% of Facebook’s revenue comes from advertising.

Thus, it seems Facebook has three promising avenues for growth:

Thus, people who link Facebook’s future growth strictly to the success of Instagram and WhatsApp are missing Facebook’s significant opportunities for growth in Asia and through better ad targeting.

The days of U.S. user growth driving Facebook’s success are long gone, but Facebook still has plenty of room to grow.