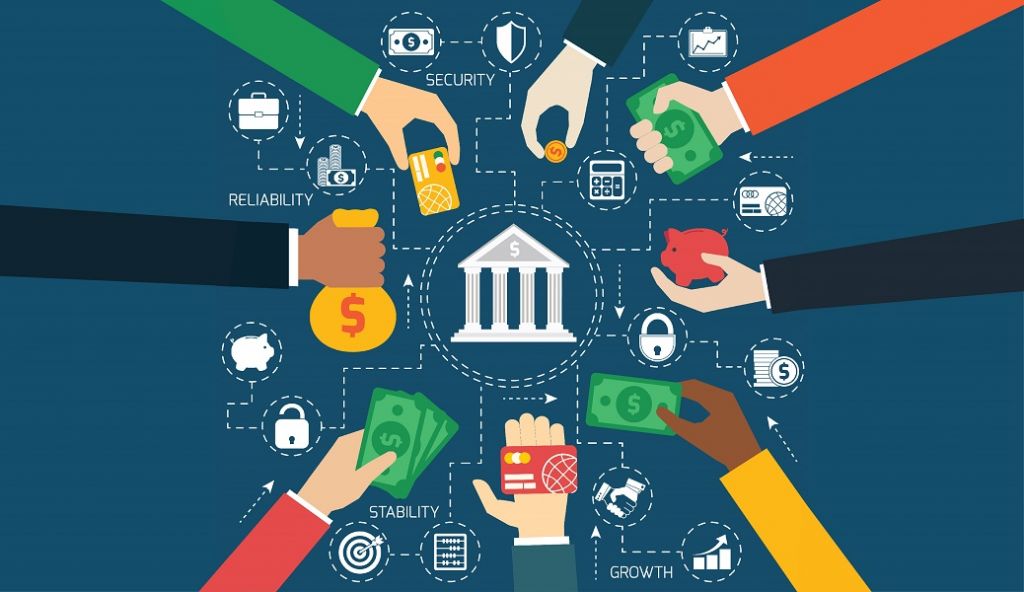 Most people see Goldman Sachs as an investment bank.  And it is, having underwritten thousands of IPOs and debt placements over the past hundred years.  But almost 80% of Goldman’s net revenue1 in 2019 came from sources other than investment banking. 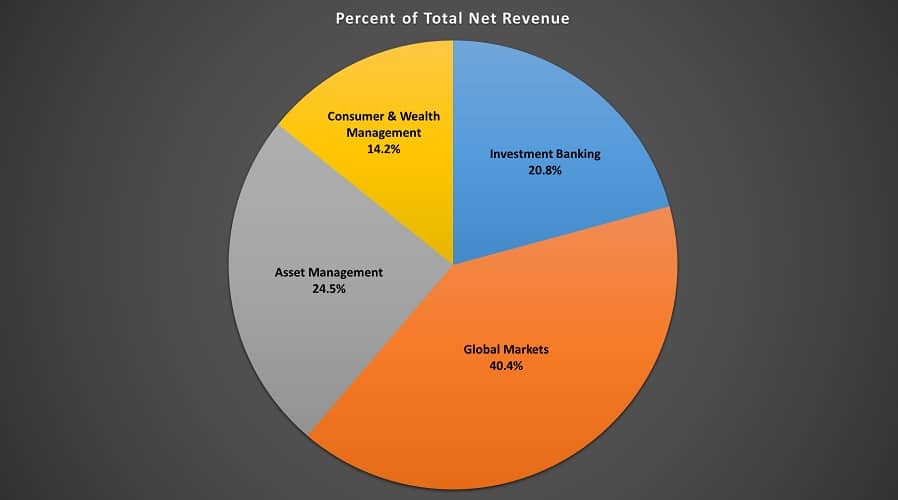 Goldman is divided into 4 business segments.

Goldman’s investment banking arm does what you might expect.  It helps companies raise money through equity and debt issuances.

The division that is responsible for more of Goldman’s net revenues than any other division is Global Markets.  In this division, Goldman acts as a market maker.  It executes transactions for clients, connecting them with a buyer or seller for their transaction.  Goldman also takes the other side of a transaction if a buyer or seller is not readily available.  These transactions could be for fixed income securities, equities, currencies, or commodities.

Clients can also access Goldman’s investment research or execute trades through Goldman’s technology platform, Marquee.  Goldman refers to Marquee as its “digital storefront” and it saves the company a lot of money, since clients have their needs met online and don’t need to talk to an actual person.  It’s like online banking for Goldman’s clients.  The trading strategies that clients find on Marquee come from Goldman’s Global Investment Research group, which provides research on industries, currencies, commodities, and 3,000 companies around the world.

The Global Markets segment gets commissions and/or fees on the transactions it executes, resulting in $14.8 billion of net revenue in 2019.  This was nearly double the net revenue of Goldman’s investment banking segment ($7.6 billion).

Goldman’s third business segment is Asset Management.  This segment was responsible for roughly $9 billion of Goldman’s net revenue in 2019, which is about 25% of the company’s total net revenue.  This segment manages the investments of large institutional investors.

Now the majority of revenue Goldman receives for this segment comes from management fees, but it also receives incentive fees.  If Goldman puts a client into an investment fund, for example, Goldman might receive a percentage of fund’s return.

Now the segment responsible for the least amount of Goldman’s net revenue is its newest segment:  Consumer & Wealth Management.  Goldman hasn’t historically targeted individual consumers and has focused more on serving companies and large institutions.  But in 2016, it launched an online bank called Marcus.  Through Marcus, individuals can set up a savings account and get loans.  In 2019, Goldman committed itself even further to consumer banking when it agreed to sponsor Apple’s new credit card.

But those aren’t the only things the Consumer & Wealth Management segment does.  It also provides wealthy advisory services to clients, and manages companies’ financial wellness programs through its subsidiary The Ayco Company.  While Goldman has been investing a lot in this segment, it accounted for just 14% of Goldman’s net revenue in 2019.

So these are Goldman’s 4 segments.  As you can see, Goldman does a lot more than investment banking. 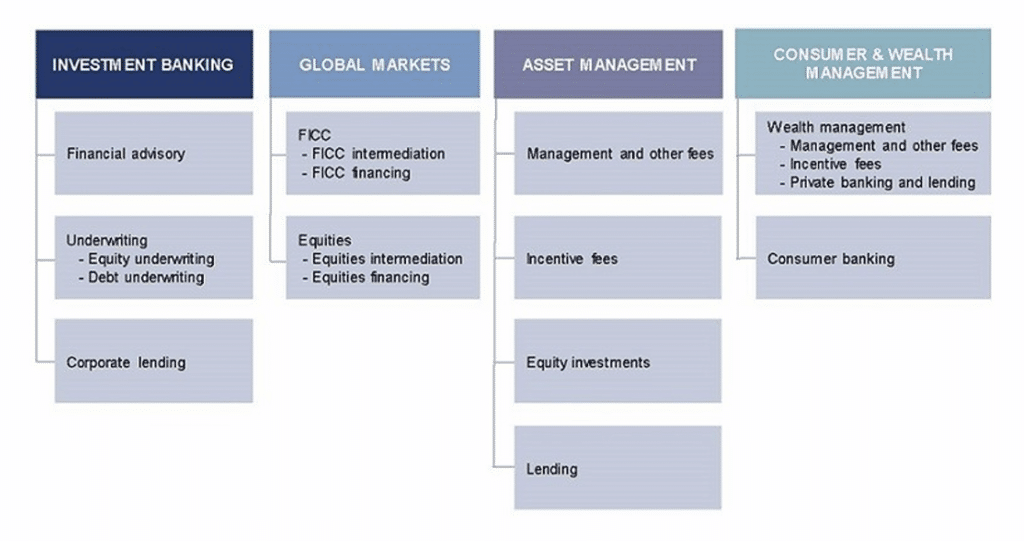 Comparing the segments, we see that Global Markets generated nearly three times the revenue of the Consumer & Wealth Management segment. 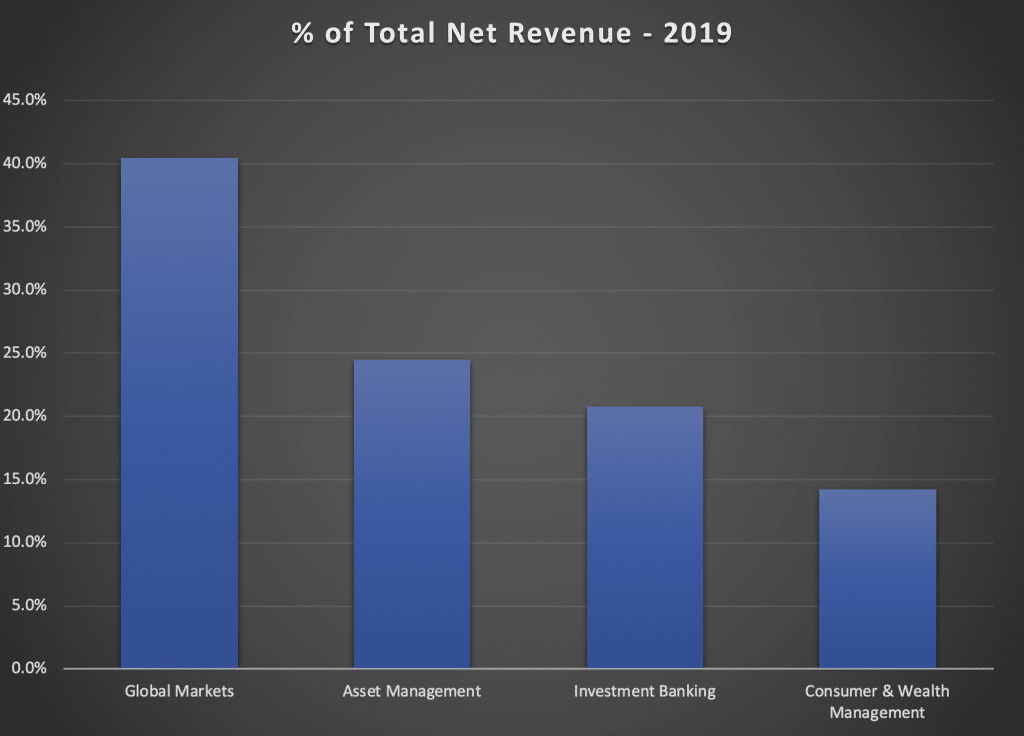 And the Consumer & Wealth Management segment was responsible for just 2.2% of Goldman’s pretax profit in 2019. 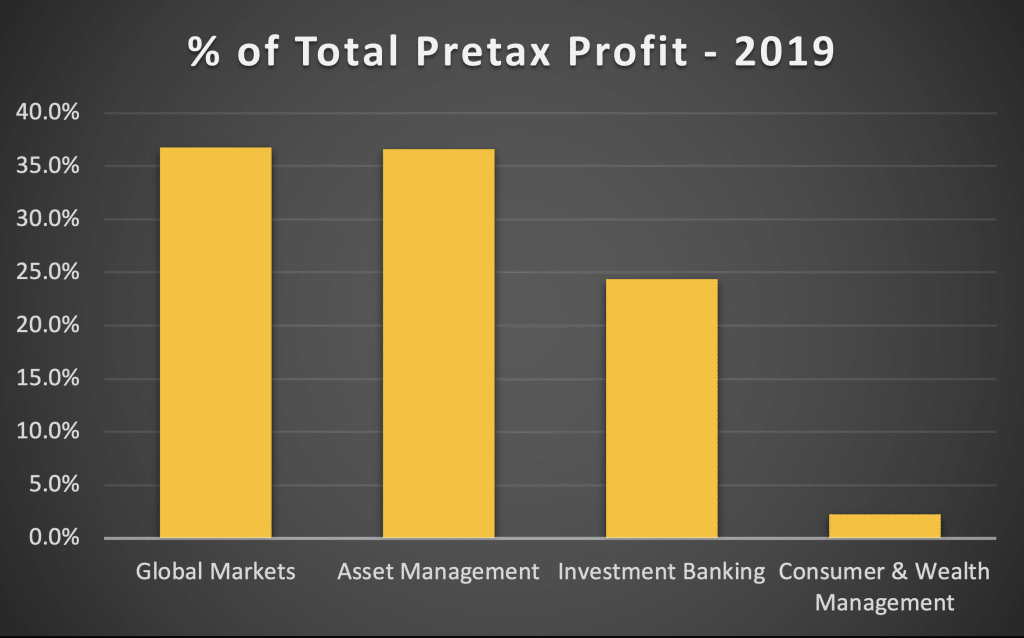 Consumer & Wealth Management also has the lowest profit margin, and it’s been getting worse over time.  This is clearly Goldman’s worst-performing segment. 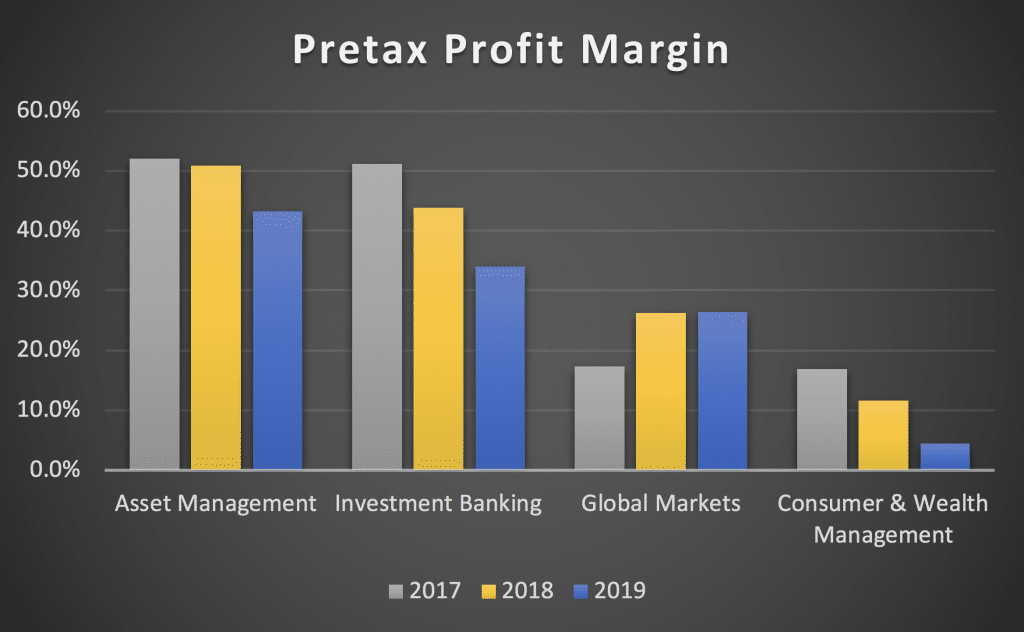 But Goldman believes consumer banking is going to be a big part of the future, so it will be interesting to see if these investments pay off 10-15 years down the road.  For right now, the investment banking segment is generating the highest return on common equity. 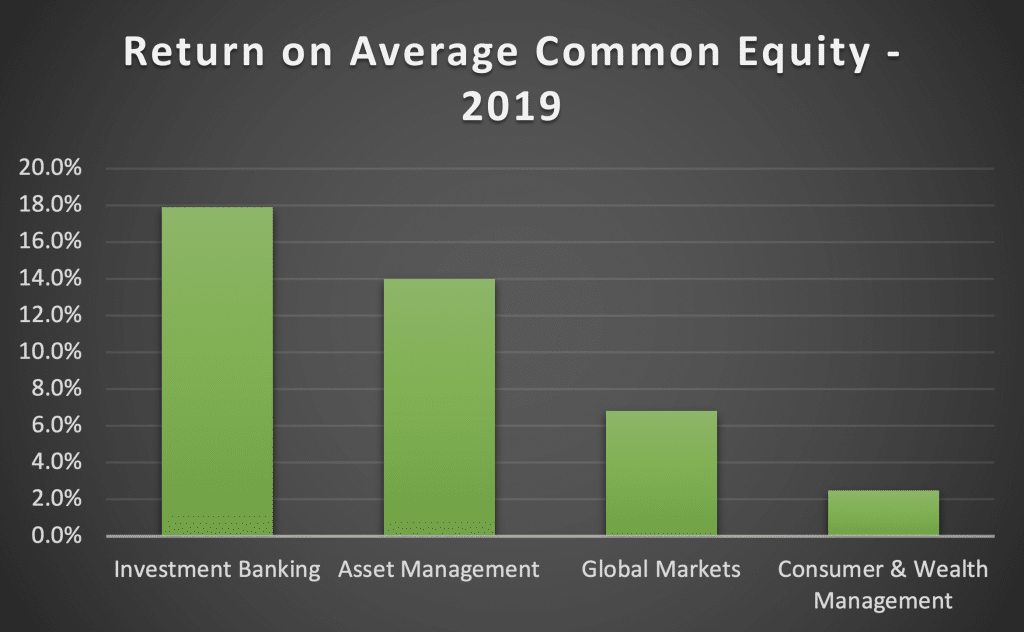 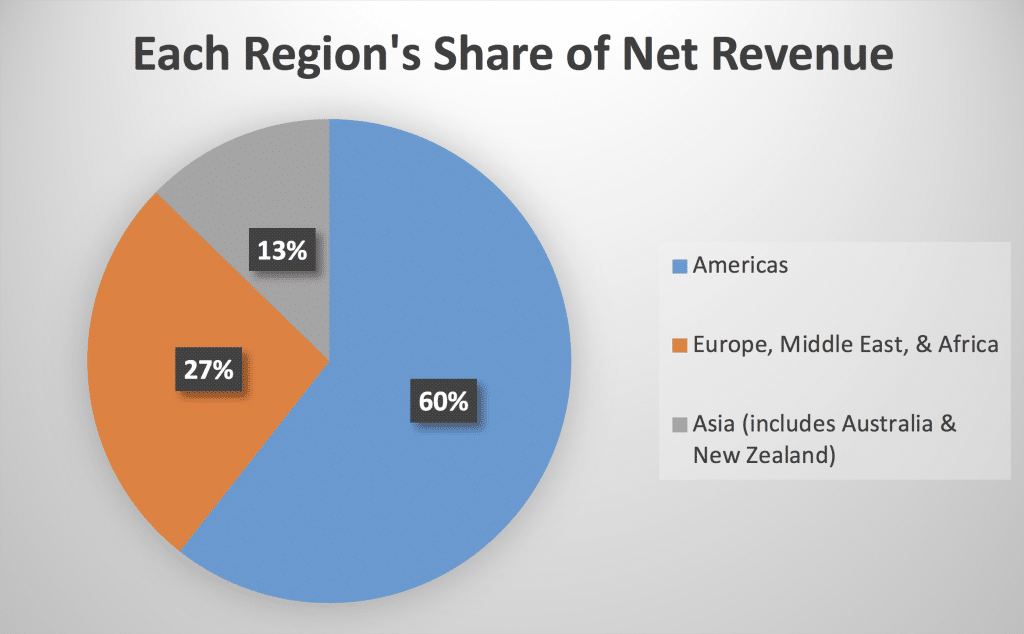 It’s surprising that just 13% of Goldman’s net revenue came from Asia in 2019, given the massive size of the economies of China and Japan.  And Goldman’s year-over-year growth has been slowest in Asia, so it doesn’t seem like Asia is going to be a bigger part of the picture anytime soon.

For right now at least, Goldman is a company that is driven primarily by its performance in the U.S.

But, who knows what the future will bring.